From Heraldry of the World
Your site history : Whittlesea
Jump to navigation Jump to search 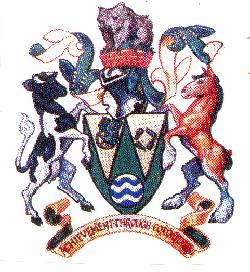 Arms: Vert, two Piles Or that to the dexter charged with a Winged Wheel and that to the sinister with four leaves of the Red Gum Tree in circle Vert in base a Fountain.
Crest: Issuant from a Mural Crown Gules a wombat statant on a grassy Mound all Proper. Mantled Vert doubled Argent.
Supporters: On the dexter side a Fresian Cow on the sinister side a Clydesdale Horse proper the tail tied with a Riband Purpure.
Motto: Achievement through commitment.

The arms were officially granted on December 1, 1993.

The green signifies the land while the gold piles signify the wealth wedged out of the land, while also forming a letter 'W' the first initial of the City's name. The fountain or wavy roundel alludes to the important waterways in the district, the winged wheel represents industry and the circlet of leaves the many red gums in the bounds of the City. The mural crown is the traditional mark of local government, while the wombat is common to this region. The dairy cow and draft horse recall the link with the original farmers and settlers of this district on the outskirts of Melbourne.