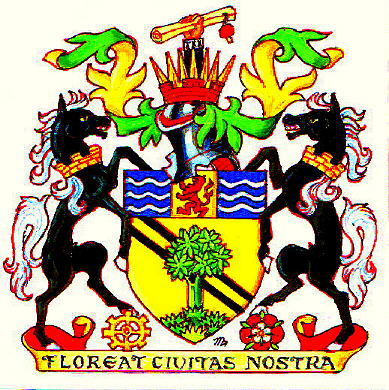 The main charge of the Gum Tree was the symbol previously used by the city, once called "the township in the woods". It also symbolizes strength, growth, and stability. The two bendlets represent the Port Road and the parallel Railway, connecting to the Port of Adelaide. The wavy top section refers to the waters of the Torrens River, Gulf St. Vincent, and the newly-formed West Lakes. St. Margaret's Church is represented by the red lion of Scotland on a gold panel, in honour of St. Margaret, Queen of Scotland.

The crest depicts the hand of the law holding a scroll, indicating that the Council holds its power under State legislation, and also is under the rule of law. The mural crown is a standard symbol of local government, while the rays of the sun symbolize progress and growth.

The two horses refer to the racing at Cheltenham Race Course, the Pony Club, Trotting Horses, the Cavalry and the use of horses for transport and agriculture by the district's pioneers. The cogwheel refers to industry, while the Tudor Rose is a charge on the arms of Queen Elizabeth Hospital at Woodville.