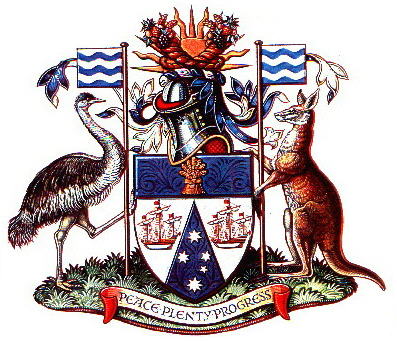 Arms : Argert, on a Pile issuant in base Azure between two threemasted Sailing Ships sails furled proper pennants flying Gules a repre­ sentation of the constellation of the Southern Cross Argent, on a chief of the Second a Garb Or.
Crest : On a Wreath of the Colours in front of a Demi Sun in splendour Or two Cornucopias in a saltire proper.
Supporters : On the dexter side an Emu and on the sinister side a Kangaroo each supporting a Staff proper flying therefrom a Banner barry wavy of six Argent and Azure.
Motto: 'Peace, Plenty, Progress'.

A lookout station was established at South Head in May 1790, and later the Macquarie Lighthouse on the cliffs facing Watson's Bay (depicted in the Badge, not the Arms of Woollahra). The maritime allusions are represented by the pile, the banners and the ships. Many of the features of the Arms come from the old seal adopted in 1907.
Many Australian municipalities chose the emu and kangaroo as symbols of patriotism, usually as supporters. The ships (alluding to Captain Phillip's landing at Camp Cove in 1788) and Southern Cross (visible all over the Southern hemisphere) were on a shield in the seal.
The rising sun signified the location of Woollahra on the east coast of New South Wales, as well as promising good things to come.
The sheaf of wheat does not refer to local crops (it could not survive in that district), but as a symbol of plenty and prosperity.
The banners allude to the considerable water frontage of this Sydney Harbour municipality, while the motto is the same as that adopted in 1907.