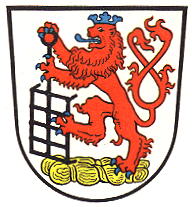 The arms were granted in 1934 and are mainly based on the 16th century seals of Elberfeld and Barmen.

The lion is the lion of Berg, holding the symbol of St. Lawrence. The two symbols were taken from the arms of Elberfeld. The arms and seal of Barmen showed the same lion, standing on a piece of yarn. The city was well known for its textile industry.