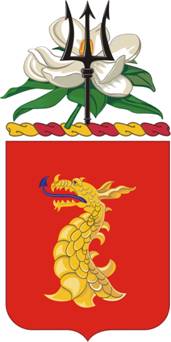 Shield: Gules, a dragon’s head erased Or, langued Azure. Crest: That for the regiments and separate battalions of the Mississippi Army National Guard: On a wreath of the colors, Or and Gules, a slip of magnolia, full flower, with leaves Proper, behind a trident Sable. Motto: AD SUMMA VIRTUS (Courage To The Last).

The shield is red for Artillery. The dragon overcame its adversaries by its fiery breath, therefore, the firing power of the Field Artillery is emphasized by the dragon’s head.