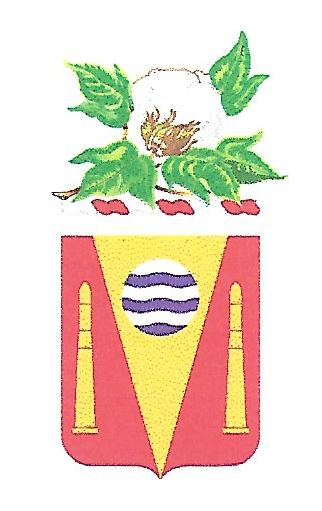 Shield: Gules, on a pile throughout between two 40mm shells Or a fountain and overall the insignia of the Signal Corps.
Crest: That for the regiments and separate battalions of the Alabama Army National Guard: On a wreath of the colors, Or and Gules, a slip of cotton plant with full bursting boll Proper.
Motto: FIRST IN DUTY.

Distinctive Unit Insignia. Description: A Gold color metal and enamel device 1 1/8 inches (2.86 cm) in height overall consisting of a shield blazoned as follows: Gules, on a pile throughout between two 40mm shells Or a fountain overall the insignia of the Signal Corps. Attached to the shield a Gold motto scroll inscribed “FIRST IN DUTY” in Red letters.

The colors red and yellow are used for Artillery. The pile represents a searchlight beam to indicate the Coast Artillery origin of the unit. The shells denote the organization’s function as an Antiaircraft Artillery Automatic Weapons unit. The insignia highlights the battalion affiliation with Signal Corps. The fountain, a heraldic symbol for water depicts the battalion’s campaign service during World War II in the Asiatic-Pacific Theater.

The Coat of Arms and Distinctive Unit Insignia, was approved for the Battalion on 8 December 1960 was cancelled and the new design for the insignia was authorized on 28 December 2004.

Literature: Image and Information from The Institute of Heraldry, US Army