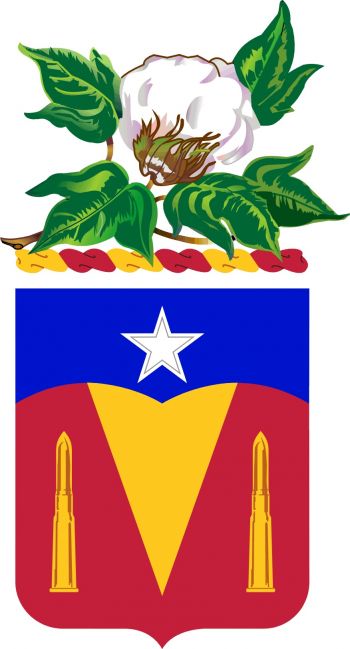 Shield: Gules, a pile between two projectiles, palewise Or, on a chief double-arched Azure, a mullet Argent.
Crest: That for the regiments and separate battalions of the Alabama National Guard: On a wreath of the colors, Or and Gules, a slip of cotton plant with full bursting boll, Proper.
Motto: PREPARED AND READY.

The predominant scarlet and gold of the Coast Artillery arm, the firing functions of the organization are indicated by the two projectiles ready for instantaneous action. The pile is representative of the search light beam used in connection with the antiaircraft functions. The double arch in chief represents the sky and the place of activation, the State of Texas, symbolized by the silver star. The motto is expressive of the alertness of the personnel.

Literature: Image and Information from The Institute of Heraldry, US Army