From Heraldry of the World
Your site history : 15th Finance Battalion, US Army
Jump to navigation Jump to search 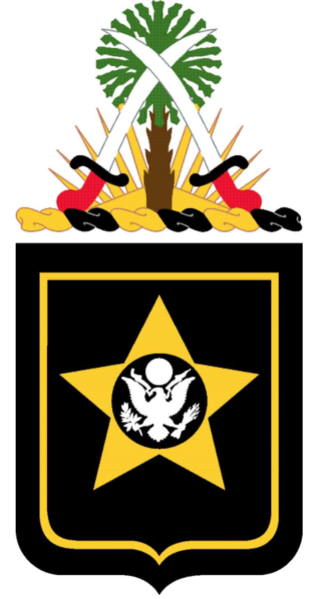 Sable, a spur rowel Or enclosing a silhouette of the Coat of Arms of the United States Argent all within an orle of the second.
Crest: Rising from a wreath of the colors, Or and Sable, a stylized demi-sun Or superimposed by a date palm Proper, overall two scimitars saltirewise of the like.
Motto: Swift Support First to Pay.

Argent and Or symbolises the Finance Corps. Black denotes solvency and solidity. The spur rowel symbolises swiftness, suggesting the heritage of prompt payment by the Paymasters of the Old West. It also suggest the Battalion's origin in Texas, the Lone Star State. The roundel with the Coat of Arms suggest a Coin a Silver Dollar. The Orle symbolises unity. The Crest symbolise service in Southwest Asia with the Date Palm from the Flag of Saudi Arabia. The Coat of Arms was approved 29 October 1992.