From Heraldry of the World
Your site history : 1st Psychological Operations Battalion, US Army
Jump to navigation Jump to search 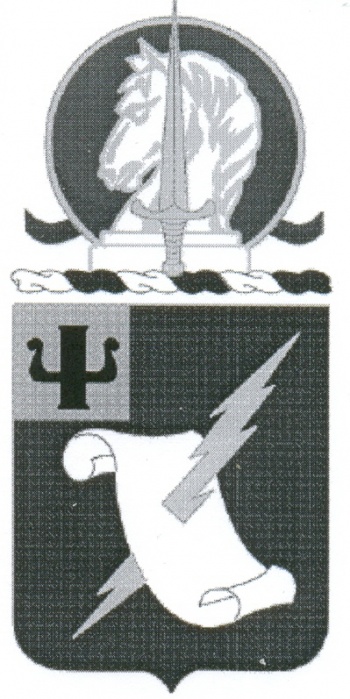 Shield: Vert (Dark Green), ascroll bendwise Argent transfixed by a lightning bolt bandwise sinister Or on a canton Argent (Silve Gray) the Greek letter "PSI" Sable.
Crest: From a wreath Argent and Vert a bar wavy Azure charged with a barrulet of the first, a taeguk Proper fimbriated Or superimposed by a chess knight of the first and overall a dagger of the fourth.
Motto: First with the finest

Drak Green and Silver Gray are the Colours traditionally associated with Psychological Operations oragnizations. The scroll refers to the unit's ability to produce and sisseminate written propaganda. The Colour white is indiactive of purity ad truth, the first and preferred type of propaganda; the colours gray and balck represents the second and third types of propaganda used by the unit when necessary. The lightning flash reflects the battalion's information distribution functions via electronic media. The Greek letter PSI suggests the word psycological and is indicative of the unit's mission. The primary structure of the letter resembles the numeral 1 and denotes the battlion's designation. The Upright dagger suggets he battalion's numerical designation while heiglightning the cutting edge of psychological military operations and technology, Gold is emblematic of nonour and high achivement, The taeguk is for Korean War service, while the wavy bars allude to the Caribbean and Grenada. The Chess knight embodies power of movement and direction, symbolizing the importance of intelligence in formulating military strategy and countermeasure.

The Coat of Arms was originally authorized 2 October 1992. It was amended to include a crest on 19 March 1997.