From Heraldry of the World
Your site history : 1st Strategic Aerospace Division, US Air Force
Jump to navigation Jump to search 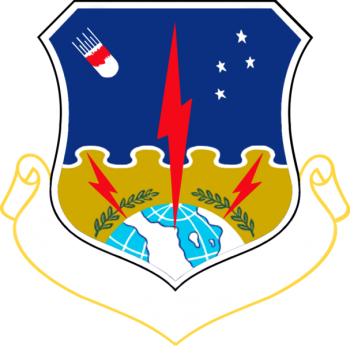 Per fess nebuly abased azure and or fimbriated argent, issuant from base a demi sphere with grid lines and land masses of the third, the latter outlined of the first and water areas poper, heightened and encircled by two olive branches vert nerved of the second; surmounting the sphere in pale, a lightning flash gules terminating in chief accousted by two smaller flashes of the like in base radiant from the sphere; in dexter chief a descending nosecone in band proper, with seven streakes of the third; in sinister chief four mullets of the like, all within a diminished border of the last.