From Heraldry of the World
Your site history : 315th Bombardment Wing, USAAF
Jump to navigation Jump to search 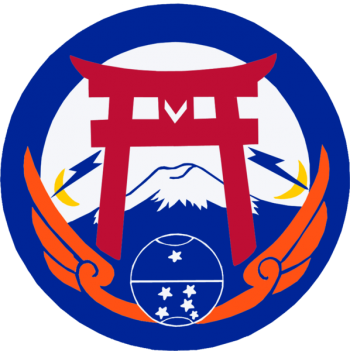 Insigne: A white disc charged in base with a medium blue represnetation of Mt. Fujiyama, between a jagged lightning flash in dexter fesse and a like flash in sinister fesse of the last, each passing trough a yellow, quarter moon, all within a border of the second, and surmounted by a large, dark red Torii pierced at center with a chevron couped inverted, above a sphere of the second outlined, marked, and charged with the Southern Cross constellation of the first, at the center of a stylized pair of golden orange wings in base.