From Heraldry of the World
Your site history : 42nd Air Base Wing, US Air Force
Jump to navigation Jump to search 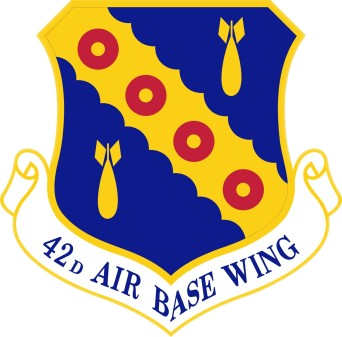 Azure, on a bend engrailed or, four annulets gules, between two aerial bombs palewise of the second, all within a diminutive border of the last.

The overall design symbolizes the wing’s mission of supporting Air University and its vital Air Force-wide education mission. The four annulets represent the primary support functions provided by the wing--personnel, facilities, supplies, and air and ground transportation. The two bombs are indicative of the wing’s ultimate goal--air power through the total support of Air University’s mission to educate and train tomorrow’s Air Force leaders. Blue symbolizes the need for knowledge. Yellow signifies the light of intellect, and red depicts the strength, passion, and zeal with which the wing carries out its mission. The original Arms was approved for the 42nd Bombardment Group 11 March 1942, becoming the emblem of the 42nd Bombardment Wing 16 April 1954