From Heraldry of the World
Your site history : 55th Bombardment Wing, USAAF
Jump to navigation Jump to search

History: Constituted as 55th Bamobardment Operational Training Wing (Medium) on 17 March 1943 and activated on 31 March. Redesignated 55th Bombardment Wing (Medium) in October 1943, and 55th Bombardment Wing (Heavy) in December. Moved to Italy February-March 1944. Where combat elements was assigned. Operated with Fifteenth Air Force in the Mediterranean and European teathers from March 1944 until May 1945. Inactivated in Italy on 9 September 1945. Redesignated 55th Fighter Wing. Allocated to the Ohio Air National Guard on 24 May 1946. Extended federal recognition on 7 December 1947. Inactivated on 31 October 1950. 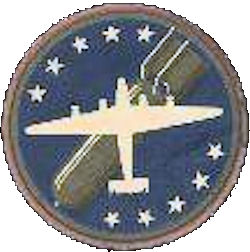 If you have any information on these arms Bombardment Wing, USAAF mail us !