From Heraldry of the World
Your site history : Accrington
Jump to navigation Jump to search 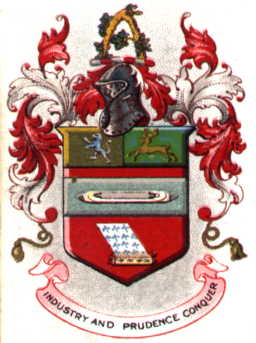 Arms : Gules on a Fesse Argent a Shuttle fessewise proper in base two Printing Cylinders issuant therefrom a Piece of Calico (paisley pattern) also proper on a Chief per pale Or and Vert a Lion rampant Purpure and a Stag current Or.
Crest : On a Wreath of the Colours an Oak Branch bent from the sinister chevronwise sprouting and leaved proper fructed Or.
Motto: 'INDUSTRY AND PRUDENCE CONQUER'.

The shuttle represents cotton spinning, and the cylinders and calico the industry of printing that material. The stag is from the arms of the local family of Hargreaves, of Broad Oak, who were closely connected with calico printing. The lion is that of the ancient family De Lacy, who held Accrington by grant of Henry II.

The oak branch is trebly allusive to the name: it is bent into the shape of its initial letter; oak (Anglo-Saxon ac ) expresses the first syllable; and the acorns recall the old form of the name, Akerenton.