From Heraldry of the World
Your site history : Adelaide
Jump to navigation Jump to search 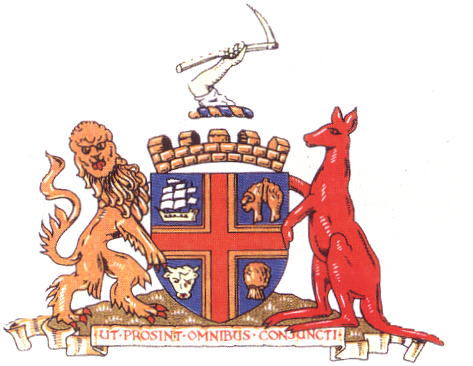 Arms : Azure, a Cross Or surmounted by another Gules between in the first quarter a three-masted Ship in full sail proper, in the second quarter a Golden Fleece, in the third quarter a Bull's head caboshed also proper, and in the fourth quarter a Garb also Or, the shield ensigned by a Mural Crown Gold.
Crest : On a Wreath of the Colours a dexter Arm embowed proper sleeved above the elbow Argent, and grasping in the hand a Miner's pick point upwards also proper.
Supporters : On the dexter side a Lion guardant Or, and on the sinister side a Kangaroo Gules.
Motto: 'Ut Prosint Omnibus Conjuncti'.

The crest shows a miner's arm, mining being one of the main industries in and around Adelaide in the early 20th century.

The supporters are the English lion and a typical Australian kangaroo.

The motto can be translated as "United for the common good".

Literature : Information leaflet published by the city of Adelaide.