From Heraldry of the World
Your site history : Aecht Frank (heraldic trade stamps)
Jump to navigation Jump to search 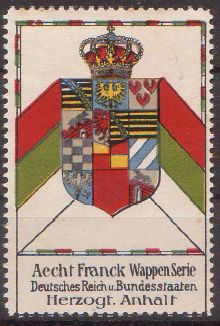 Aecht Franck was a producer of chicory coffee and coffee flavourings. The company was founded in 1828 in Vaihingen, Württemberg, Germany by Heinrich Franck. In the 1860s the factory was replaced to Ludwigsburg. In 1943 the company merged with its largest competitor Kathreiner to Unifranck, but the brand remains until 1971, when the company was bought by Nestlé. The factory in Ludwigsburg still produces coffee replacers, but not under the Franck name.

The company produced a lot of advertising and trade cards/stamps. The cards were issued in the format of Liebig, the stamps were issued in different sizes. A large number of topics were published, but only a few with heraldic themes, such as the series shown here.

I have no idea how many stamps were actually issued, as they are not numbered. The series are named Deutsche Reichs- und Bundesstaaten (German States) and show the arms and flags of the different States and semi-independent countries of the German Empire, including Elsass-Lothringen.