From Heraldry of the World
Your site history : Archdiocese of New York
Jump to navigation Jump to search 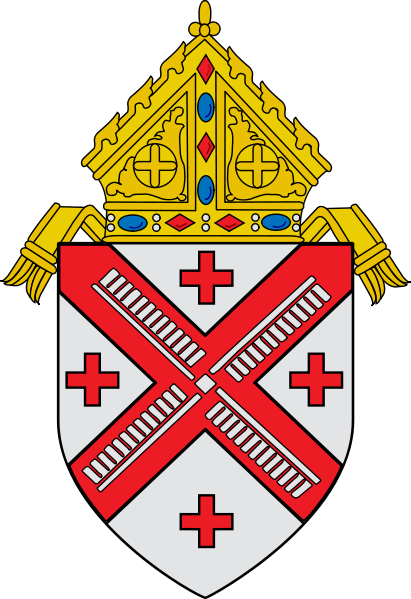 Argent, upon a saltire between four crosses gules a mill-sail of the field.

The red saltire is clearly intended as a “Cross of St. Patrick”. Meanwhile, the windmill blades displayed saltirewise are the central element in the arms of the City of New York. The combination of both elements thus unites an emblem of the Archdiocesan patron saint with an emblem of the see city.

The saltire gules on a field argent are the arms of the Duke of Leinster (the premier peer of Ireland), and of the Fitzgerald family. With the creation of the chivalric “Order of St Patrick” by King George III in 1783, the red saltire of the Fitzgeralds was adopted as the badge of the Order under the name “the cross of St. Patrick”, and as such the red saltire was soon considered a symbol of Ireland and of St. Patrick.