From Heraldry of the World
Your site history : Archdiocese of Winnipeg
Jump to navigation Jump to search 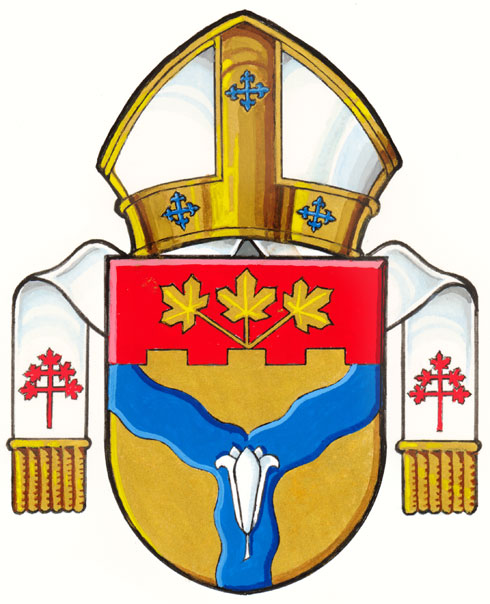 The Y-shape alludes to the Forks (a traditional meeting place for First Nations Peoples), where the Red and Assiniboine rivers converge at Winnipeg to form a single stream. The gold of the shield represents the wheat fields of southern Manitoba and, by extension, the Eucharist as the bread of life. The blue refers to the waters of baptism, the gateway to Christian life. The lily refers to the Blessed Virgin Mary, patronness of the cathedral of the Archdiocese, and to St. Joseph, the principal patron of the Archdiocese, the city of Winnipeg and Canada. The crenellated line refers to Fort Rouge, the settlement established on the site of Winnipeg in 1738 by the explorer La Vérendrye. The maple leaves are a Canadian symbol and allude to the diversity of the archdiocese’s population, and their number represents the Holy Trinity.

Literature : Information and images from http://www.gg.ca