From Heraldry of the World
Your site history : Auma
Jump to navigation Jump to search 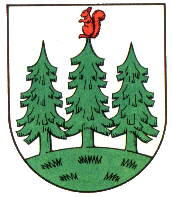 The arms are known since the first half of the 15th century. Originally the pine trees were beeches. In the 17th century the number of trees was often reduced to a single tree with a squirrel in the top (see f.e. also Vimmerby in Sweden). The actual meaning of the arms is not known. The present colours are derived from the money issued in Auma in 1921, as no historical colours were known. Those showed a blue field, which was not heraldically correct (see below), the field was therefore changed to silver.