From Heraldry of the World
Your site history : Australia and New Zealand Bank
Jump to navigation Jump to search 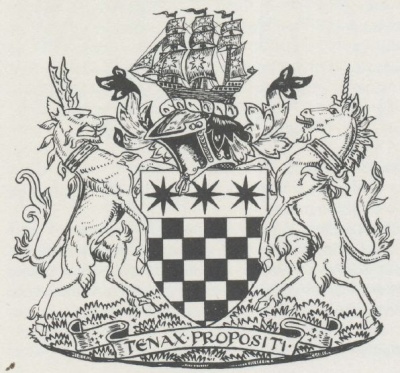 Arms : Chequy Or and Azure, on a Chief Gold three Mullets of eight points also Azure.
Crest : On a Wreath of the Colours a three-masted Ship proper, sails set Azure, each charged with a Mullet of eight points Or, the Pennons and Flag flying Gules.
Supporters : On the dexter side an Heraldic Antelope Argent, attired and crined Or, and on the sinister side a Unicorn also Argent, armed and crined Gold, both collared Gules.
Motto: 'Tenax Propositi'

The arms were officially granted on September 6, 1960.

The Shield bears a direct relationship to the well-­known A.N.Z. Bank symbol of the Chequerboard with Stars, while the Crest, a three-masted Ship, signifies the overseas origin of both founding banks (Bank of Australasia and Union Bank of Australia).

The initial letters of the Supporters - the Antelope and Unicorn - are allusions to represent the Australasia and Union Banks, while the motto ('Tenacious of Purpose') is the family motto of the Hon. Sir Geoffrey C. Gibbs, K.C.M.G., the first Chairman of the Bank.