From Heraldry of the World
Your site history : Avon
Jump to navigation Jump to search 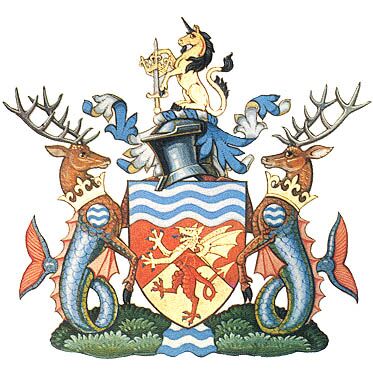 Arms : Per chevron Gules and Or a Dragon rampant counterchanged a Chief wavy barry wavy of six Azure and Argent.
Crest : On a Wreath Argent and Azure a Unicorn sejant erect Or armed crined tufted and unguled Sable supporting a Sword erect Argent hilted and pommelled enfiling a representation of the Crown of King Edgar Or.
Supporters : On either side a Sea Stag proper gorged with an ancient Crown of Fleurs-de-Lys Or and charged on the shoulder with a Fountain the whole upon a Compartment composed of two Grassy Mounts divided by Water barry wavy Argent and Azure.

The arms were officially granted on 15th December 1976.

The Shield expresses in a simple way the name of the County and its historical origins. At the top, six blue and white waves represent the Avon and the six districts comprising the County. The waves are also indicative of the Severn and coastal areas.

Avon combines historical links with Wessex and Celtic Britain. With both cultures the dragon is associated. The Wessex dragon is sometimes red, as in the arms of Somerset and Wiltshire, sometimes gold, as in those of Dorset and several civic authorities in the area. The British dragon is red also. The dual link is represented in the shield by a dragon divided into gold and red by a chevron-shaped partition line which divides the shield into the reversed colours. The shield of Gloucestershire is similarly partitioned, and the arms of both Somerset and Gloucestershire thus contribute to the arms of their 'offspring' to show its identity.

The shield is superimposed with a crest with the usual helm, crest wreath and mantling. The wreath and mantling are in white and blue, the heraldic colours for water as seen in the six Avon waves in the Shield. The crest combines the unicorn of Britsol with the sword St. Paul (one of the patron saints of Bath Abbey) and the crown of King Edgar, who was crowned King of all England by St. Dunstan in Bath Abbey on Whit Sunday A.D. 973 The sword and crown occur in the arms of Bath.

The supporters, never before used in civic heraldry, are sea-stags, ie. Stags with fishtails. They represent the fusion of two characteristic features of Avon - sea and forest. The historic importance of the Avon ports is linked with that of the Royal Forests which covered a large part of the County. Each stag is a 'stag royal', i.e with six tynes on each antler, and has about the neck as ancient crown of fleurs-de-lys to emphasise the royal association. On the shoulder of the sea-stag is roundel of six white and blue waves, again representing the rivers and springs of the County.

Instead of having a motto scroll below, the arms are based on a special 'compartment' representing the Cotswold and Mendip hills, with the Avon running between

Literature : Information leaflet provided by the Council of Bath and North-East Somerset.