From Heraldry of the World
Your site history : Baden-Baden
Jump to navigation Jump to search 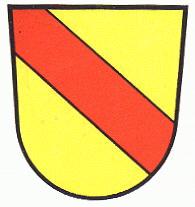 The village became around 1100 a possession of Hermann II of the Zähringen family, who named himself after the town, Count of Baden. During the 13th century the town received city rights and became the capital of the County of Baden, since 1535 of the branch Baden-Baden. It remained the capital until the early 18th century.

The city has always used the arms of the Counts of Baden as its arms. The oldest known seal dates from the 14th century, but is known only since 1421. The arms thus have never changed since. To distinguish the arms of the city from those of the Duchy and State of Baden, the city often used a mural crown, but this was never officially approved.