From Heraldry of the World
Your site history : Baildon
Jump to navigation Jump to search 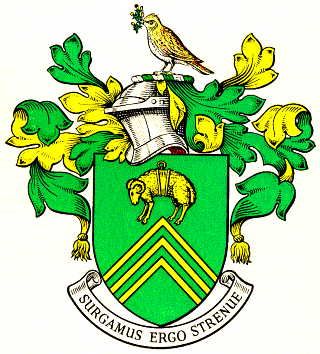 Arms : Vert three Chevronels and in chief a Fleece Or.
Crest : On a Wreath of the Colours a Skylark holding in the beak a Sprig of Gorse slipped and flowered proper.
Motto: 'SURGAMUS ERGO STRENUE' - Let us arise with vigour

The arms were officially granted on September 30, 1952.

The green field and golden fleece allude to the rearing for wool of sheep on the Baildon Moorlands. The golden fleece formed an integral part of Baildon's unofficial badge and which badge has been used for very many years. The three chevronels point to the fact that Baildon is a three-tier Town.

The skylark with a sprig of gorse in its beak alludes to the Moors in and surrounding Baildon.

The motto would have appealed to the civic pride of the hillmen of Baildon and appears to be taken from a hymn attributed to St. Ambrose.