From Heraldry of the World
Your site history : Ballina (New South Wales)
Jump to navigation Jump to search 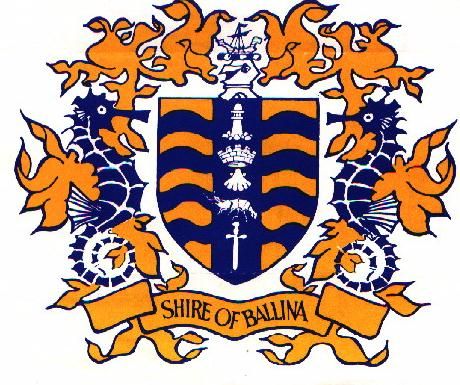 Adopted by the Shire Council on 23 June 1977, but not officially registered or granted.

The blue and gold waves symbolizing the sea and the sunlight on the waves. On the central stripe the lighthouse, scallop shell and shrimp allude to Ballina's seaport and fishing industry. The mural crown refers to local government while the sword is for one of the meanings of the shire's name "a place where a battle was fought". The seahorse supporters and lymphad in the crest continue the maritime symbolism, while the mantling looks more like seaweed with the top section allusive of seagulls.