From Heraldry of the World
Your site history : Banbridge
Jump to navigation Jump to search 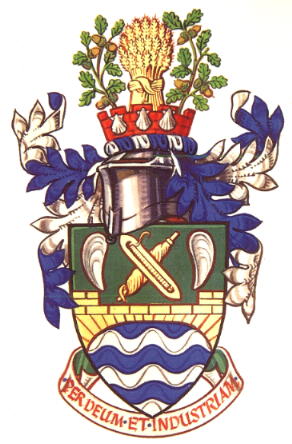 Arms : Per fess vert and barry wavy azure ans argent, a representation of the bridge over the river Bann, in chief a spindle ans a shuttle in saltire Or between two mussel argent.
Crest : On a wreath argent and azure, Issuant from a mural crown gules charged with an escallop argent, a garb Or between two branches of oak leaved and fructed proper.
Motto: Per Deum en Industriam

The arms were officially granted on May 5, 1964 to the Banbridge UDC.

The lower half of the shield represents the rivers running through the district. The bridge is canting, the bridge over the Bann river. The shuttle and spindle represent the formerly important spinning and weaving linen trade. The freshwater mussels represent the ancient pearl fisheries in Banbridge.

The crest shows three scallops taken from the Downshire family, who had several estates in the area. The garb symbolises the agriculture and the oak leaves the forests in the district.

The motto means By God and Industry.

Literature : Information provided by the [1] DC.