From Heraldry of the World
Your site history : Bangor (Northern Ireland)
Jump to navigation Jump to search 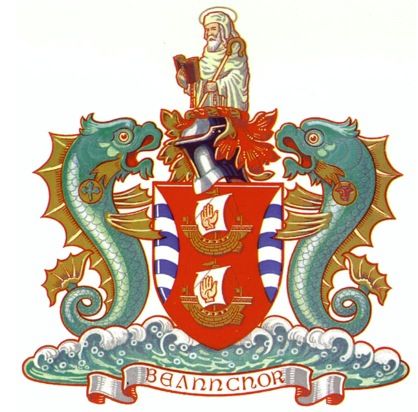 Arms: Gules, two lymphads in pale Or, each with a sail argent charged with a dexter hand couped of the field; all between as many fiaunches barry wavy argent and azure.
Crest: On a wreath of the colours, A demi figure representing St. Comgall vested as an abbot of the sixth century reading an open book held in his dexter hand and sup­ porting with his sinister hand a pastoral staff, the crook resting on his shoulder, all proper.
Sup­porters: On either side a dolphin vert, finned Or, the dexter charged with a bezant thereon a trefoil slipped also vert and the sinister with a bezant thereon a hull's head caboshed proper.
Motto: Beannchor.

The shield is emblazoned with two ships, which feature the Red Hand of Ulster on their sails, denoting that Bangor is in the province of Ulster.

The wavy bars show that Bangor is a seaside town.

Supporting the shield are two dolphins, signifying Bangor's links with the sea. Each is charged with a gold roundle; the left featuring a shamrock to represent Ireland, and the right featuring a bull's head, possibly in reference to the derivation of the town's name.

The crest shows a haloed St Comgall, founder of the town's abbey, who was an important figure in the spread of Christianity.

The motto reads Beannchor, the archaic form of the town's name in Irish.