From Heraldry of the World
Your site history : Barré Dayez Postcards
Jump to navigation Jump to search 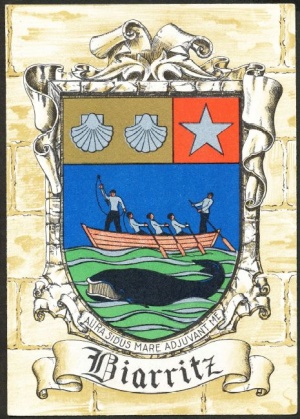 These cards were issued by a publisher in Paris, founded in 1925 by Maurice Barré and Jules Dayez. They published over 5000 cards, of which one large series of heraldic cards, with the arms of towns and regions of France, the Belgian provinces, cities in French colonies and overseas territories, as well as the arms of certain professions. They can be easily recognised by the 'brick' pattern on which the arms are shown, as well as the letters BD in a square on the back of the cards.

The cards were very popular and have also been used as first day cards when the arms shown were also used on the French stamps. The French Postal Museum also issued in 1965 cards of the towns that have the privilege to use the War Medal in their arms with a special stamp to commemorate this war medal. Some of these stamped cards are also shown below. 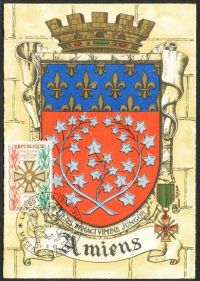 The cards have been reprinted several times. Altthough all have the same brick design, there are different types of this brick design:

Differences are sometimes hard to see, but are quite clear when two different cards can be compared. Discolouration can also have occurred by light exposure and time, making it more complicated.

A further difference can be a small signature under the banner with the name of the region/town, see image below, which is not always present.

At the same time, the reverse of the cards can be printed in black or brown, with or without a year or additional texts, see some examples below. At least 8 versions are known.

Only a few image variants are known, whenever I know of these, they are shown below in the overview.

All together there are a large number of variations among the cards, as many variations exist with cards from the same town/region.