From Heraldry of the World
Your site history : Bath (Ontario)
Jump to navigation Jump to search 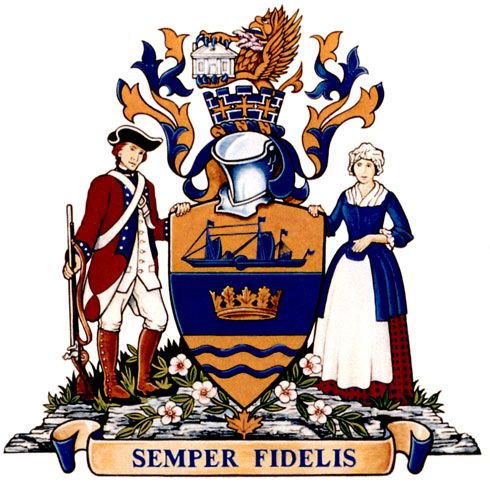 Arms: Or on a fess between in chief a representation of the steam vessel Frontenac tempore 1816 and in base two bars wavy all Azure a Loyalist civil coronet Or
Crest: Issuant from a mural coronet Azure masoned Argent charged with three crosses moline Or a demi griffin Or armed Azure gorged with lilac flowers Purpure bearing between its claws a representation of a Georgian house Argent
Supporters: On a grassy mound set on limestone rocks proper two sprigs of vinca flowers also proper issuant from a maple leaf Or dexter a man habited in a uniform of Jessup's Loyal Rangers tempore 1784 sinister a woman habited as a Loyalist settler tempore 1784 all proper
Motto: SEMPER FIDELIS

If you have any information on these arms (Ontario) mail us !