From Heraldry of the World
Your site history : Beaufort West
Jump to navigation Jump to search 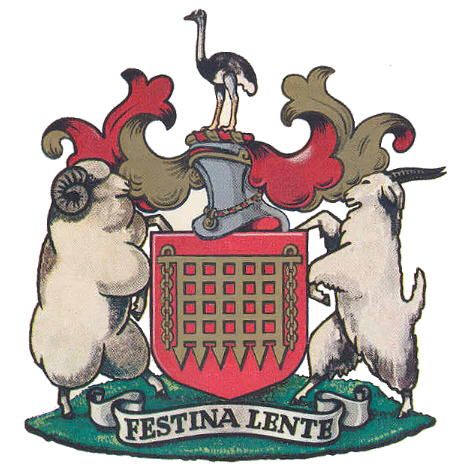 The town was named after the Duke of Beaufort, father of the Governor of South Africa, Lord Charles Somerset. The portcullis is derived from the crest of the Dukes of Beaufort. The city is an important railroad centre and capital of an area famous for its Merino sheep, hence the sheep as supporter. John Charles Molteno, later first Prime Minister of the Cape Colony, began farming with merinos in the Beaufort West district in 1836-41. The district is still a major wool producer.


The sinister supporter, an Angora goat, also represents an important agricultural industry, producing mohair for export. The crest shows an ostrich, a bird which in the late 19th century rose to importance as a producer of feathers which fetched extremely high prices in London. Beaufort West was never as important a centre of the ostrich feather trade as Oudtshoorn or Port Elizabeth, but its farmers grew wealthy out of the trade, which has revived in the late 20th century.

The motto translates as "Hasten slowly."