From Heraldry of the World
Your site history : Bebington
Jump to navigation Jump to search 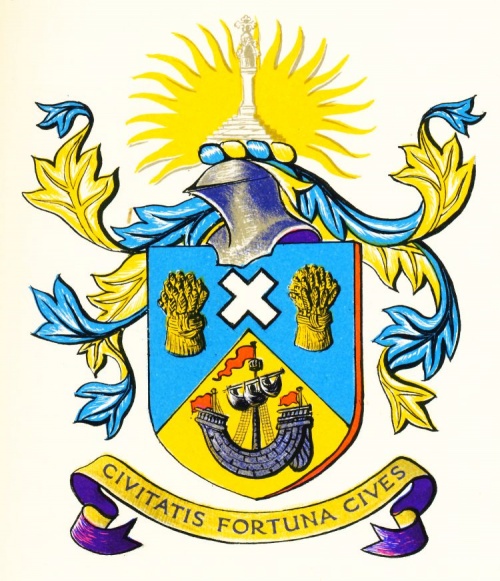 Arms : Per chevron Azure and Or in chief a Saltire couped Argent between two Garbs of the second and in base a Lymphad sail furled Sable flags flying to the dexter Gules.
Crest : On a Wreath of the Colours in front of a rising Sun Or a representation of the Bromborough Market Cross proper.
Motto: 'CIVITATIS FORTUNA CIVES' - The fortune of the state depends on the citizens

The arms were officially granted on January 3, 1934.

The wheatsheaves are taken from the Earldom of Chester. Edward, Earl of Chester, later King Edward I, granted to the monks of St. Werburga a charter for holding a market weekly at Bronborough, now part of Bebington. The cross on the crest is the ancient market cross that stood in the center of the village.

The ship refers to the importance of Bebington as a Merseyside port.