From Heraldry of the World
Your site history : Beeston and Stapleton
Jump to navigation Jump to search 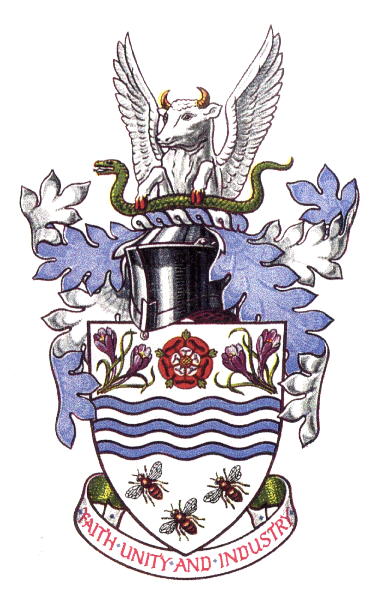 Arms : Argent three barrulets wavy Azure in chief a Tudor Rose btween two Posies each of two Purple Crocuses and Bent Grass and in base three Bees two and one each Bee volant in bend all proper.
Crest : On a Wreath of the Colours a demi winged Bull affrontée Argent armed Or resting the hooves Gules on a Serpent proper.
Motto: 'FAITH UNITY AND INDUSTRY'

The rose in the upper part of the arms if the Tudor rose, a traditional English symbol, and also a symbol for the rose-growing fame of the district. The rose is flanked by two crocuses and long grasses. These are canting, the name is derived from Beos-Tun or the place where the bent grass grew. The crocuses are the Nottingham Meadow Crocus, a typical flower for the area.

The wavy bend symbolises the river flowing through the district.

The three bees in the base of the shield are canting, and also symbolise the industrial character of the district. The bee is a symbol for energy and activity. The crest shows the winged bull, the symbol of St. Luke. The bull and snake can already be seen on the old cross at Stapleton and in the Stapleton parish church.