From Heraldry of the World
Your site history : Benoni
Jump to navigation Jump to search 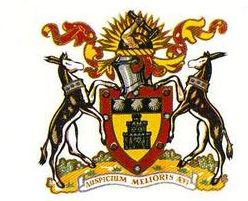 The castle and escallops apparently come from the arms of the Duke of Bedford. The gold roundels in the border represent gold-mining. The four fountains represnet the four springs or fountains in the municipality (Kleinfontein, Modderfontein, Rietfontein and Vlakfontein). The arm in the crest refers to the industry and the rising sun symbolises destiny.

The springboks are a symbol of South Africa and they wear collars representing the gold mining again.

The previous, non official arms are shown below: 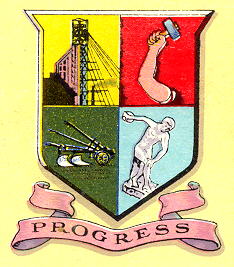 Benoni is a mining and industrial town on the East Rand. The above "arms" appear to allude to mining, industry, agriculture, and sport.

Literature: Old image scanned from a cigarette card from the 1930s;