From Heraldry of the World
Your site history : Berkhamsted
Jump to navigation Jump to search 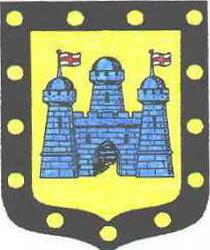 Or a Castle of three Towers each domed Azure flying from the two outer towers a Banner Argent charged with a Cross Gules all within a Bordure Sable bezanty.

Berkhamsted uses the arms of the Borough of Great Berkhampstead, recorded in 1634. These show the town's castle within a black bordure charged with golden bezants. This denotes that the town belonged to the Duchy of Cornwall.