From Heraldry of the World
Your site history : Camberwell > Bermondsey
Jump to navigation Jump to search 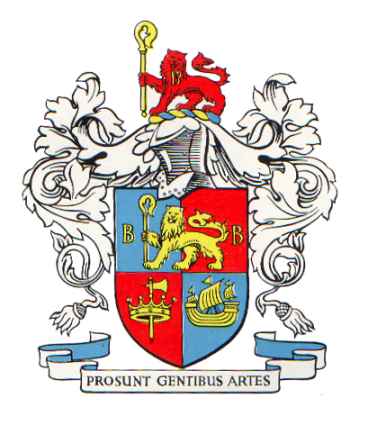 Arms : Quarterly Azure and Gules in chief a Lion passant guardant supporting with the dexter paw a Crosier erect between two Roman B's in the third quarter a Battle Axe erect blade to the sinister enfiled by by a Ducal Coronet and in the fourth quarter an anicient ship of three masts sails set and flags flying to the dexter all Or.
Crest : On a Wreath of the Colours a Lion passant guardant Gules charged on the shoulder with a Roman B supporting with the dexter paw a Crosier erect both Or.
Motto: 'PROSUNT GENTIBUS ARTES' - Arts profit the people

Bermondsey was formed in 1900 from the parishes of Bermondsey, Rotherhithe, St. Olave, St. John, Horslydown and St. Thomas, Southwark.The crown and battle-axe are emblems of the Saint-King Olaf of Norway who was summoned by Ethelred to help him resist the Danes, and destroyed the old fortified bridge over the Thames to attack the Danes at Southwark. He was the patron saint of the parish of St. Olave.

The lion and the crosier refer to the ancient Abbey of Bermondsey, which enjoyed royal favour. The ship represents the old shipbuilding industry in Rotherhithe.