From Heraldry of the World
Your site history : Berwick (Victoria)
Jump to navigation Jump to search 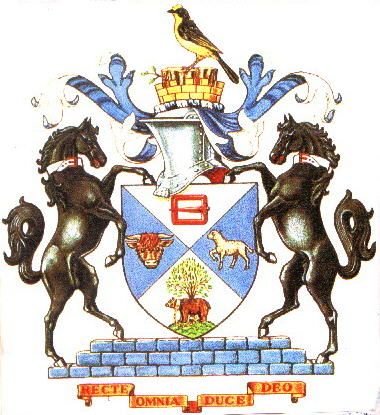 The arms were officially granted on April 8, 1976.

The chained bear on the shield is the arms of Berwick-on-Tweed in Northumberland, from where Captain Gardner, the first settler originated, and named his run 'Berwick'. The bull's head was the insignia of the former Berwick Shire Council. It also celebrates the Ayrshire bull "Lord Beaconsfield", produced in the Berwick district, which, when crossed with Shorthorn cows, produced the famous Illawarra breed of cattle.

The lamb refers to primary production, the basis of the farming community which developed into the present city. The buckle is a symbol of 'success by endeavour', a challenge to the Council of a relatively new city in the 1960's.

The black horses, as with so many Australian arms, alludes to the role played in transportation in the early days. The bluestone wall refers to Wilson's Quarry from which the ballast for the Gippsland railway was quarried and which was a pioneer of this industry still operating in the district.

The honeyeater is a beautiful bird still found in the upper reaches of Cardinia Creek, the eastern boundary of the city, and is now regarded as Australia's most endangered species of bird. The tree stump is a symbol of renewed life and the beauty of the many trees, both native and exotic, found in the Berwick region.

Literature : image and background provided by Denis Towner, based on notes from Leaflet for the Dedication of the Arms, provided by Casey City Council.