From Heraldry of the World
Your site history : Billingham
Jump to navigation Jump to search 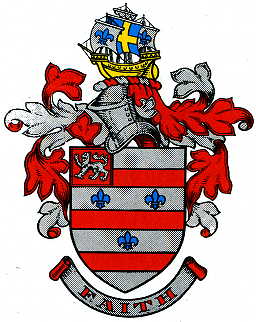 Arms : Argent between three Bars Gules three Fleurs-de-Lis Azure a Canton Gules charged with a Lion passant Argent.
Crest : On a Wreath Argent and Gules an Ancient Ship of three masts Or the mailsail Azure chaged with a Cross Or and the foresail and mizzen sail Argent charged with a Fleur-de-Lis Azure.
Motto: 'FAITH'

The arms combine those of the Billingham and Bellasis families.

The ship represents the district's close associations with shipping and the River Tees. The cross on the mailsail refers to St. Cuthbert, to whom the Parish Church is dedicated.