From Heraldry of the World
Your site history : Bingley
Jump to navigation Jump to search 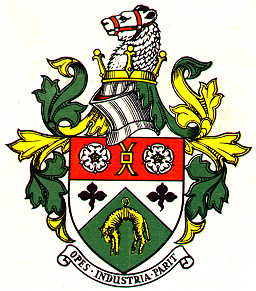 Arms : Per chevron Argent and Vert in chief two Trefoils slipped Sable and in base a Fleece Or on a Chief Gules a Millrind Gold between two Roses Argent barbed and seeded proper.
Crest : Issuant from a Saxon Crown Or a Bear's Head Argent muzzled Gules; Mantled Vert doubled Or.
Motto: 'OPES INDUSTRIA PARIT' - Industry begets plenty.

The black trefoils derive from the arms of the Bingley family, previously used by the UDC. The fleece and millrind allude to the woollen and engineering industries and the white roses are for Yorkshire.

The muzzled bear is also from the crest of the Bingley family, differenced by the addition of a Saxon crown.