From Heraldry of the World
Your site history : Bishop's Stortford
Jump to navigation Jump to search 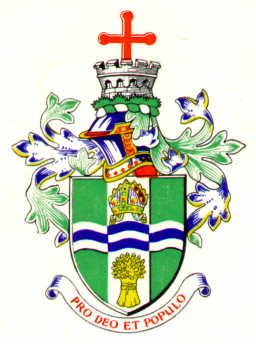 Arms : Vert on a Pale Argent surmounted by a Fess wavy of the last charged with a Bar wavy Azure counterchanged on the Pale a Mitre and Garb proper.
Crest : On a Wreath of the Colours on a Mount Vert the Battlements of a Tower proper issuant therefrom a Cross pommelled Gules.
Motto: 'PRO DEO ET POPULO' - For God and the people.

The green background, waves and wheatsheaf refer to the River Stort, the rural and agricultural area through which it flows and the ford from which the town takes its name. The mitre refers to the Bishops of London, who brought the Manor from Eddeva the Fair, wife of King Harold.

The battlements represent Waytemore Castle, built by William I, whose ruins now stand on a grassy mound in the Castle Gardens. The cross is that of St. Michael, to whom the parish church is dedicated.