From Heraldry of the World
Your site history : Bocking
Jump to navigation Jump to search 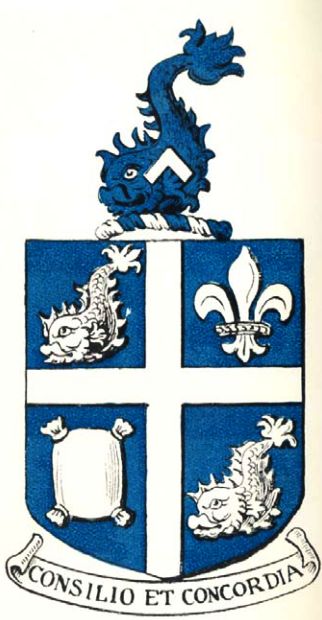 Arms : Azure a Cross between in the first and fourth quarters a Dolphin naiant in the second quarter a Fleur-de-Lys and in the third quarter a Woolpack all Argent.
Crest : On a Wreath of the Colours a Dolphin naiant Azure charged with a Chevron couped Argent.
Motto: 'CONSILIO ET CONCORDIA' - By counsel and good fellowship.

The arms were officially granted on November 23, 1927.

The white cross on blue is from the arms of the Priory of the Holy Saviour at Canterbury (which are still used by the Dean and Chapter). Bocking was given to the Priory by the Saxon Atheric Worthfulman and his wife Leofwin in 1006. The dolphins are from the crest of William Courtnay, Archbishop of Canterbury from 1381 to 1396. The cross and dolphins were taken as the seal of Bocking Deanery, the first of which dates from the time of William Courtnay. The Courtnays adopted a dolphin, the symbol of Byzantium, as their crest to show their connection with that maritime empire, one of whose emperors descended from a branch of the family. The woolpack refers to weaving and spinning, which has been practised in Bocking since Saxon times. In 1304 Flemish craftsmen were introduced into the town, and under their guidance Bocking grew to be one of the greatest weaving towns in the country. The silver fleur-de-lys is from the arms of the Courtauld family, four generations of which made their home in the parish. The chevron, commemorates the Doreward family, William Doreward in 1362 created the town's first school by endowing a chantry chaplain. In 1392 his son John added to the endowment. Another John Doreward was speaker of the House of Commons and Sheriff of Essex and Hertfordshire in 1425. He gave the town the "Maison Dieu" or hospital, now called the almshouses. The chevron also occurs in the heraldry of many others connected with the town.

Incidentally the Bocking Parish Council has the distinction of being the first such body to be granted arms. The arms were however short lived as the parish was amalgamated with the neighbouring Braintree Urban District Council in 1934.