From Heraldry of the World
Your site history : Boston (Borough)
Jump to navigation Jump to search 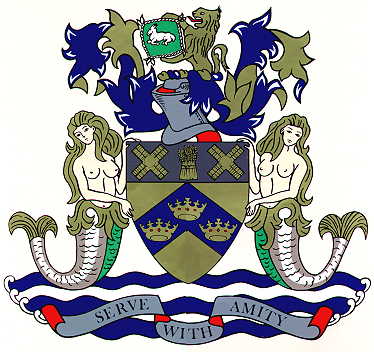 Arms : Or on a Chevron Azure three Coronets each composed of Crosses Paty and Fleurs-de-Lys Or on a Chief Sable a Garb between two Pairs of Windmill Sails also Or.
Crest : On a Wreath of the Colours a demi Lion Or holding between the forepaws a Woolsack proper charged with a Ram couchant Or.
Supporters : On either side a Mermaid proper crined and finned Or upon a Compartment of Waves barry wavy Azure and Argent.
Motto: 'SERVE WITH AMNITY'.

The arms were officially granted in 1974.

In 1974 the Borough was enlarged by the addition of the Boston Rural District, and new arms were granted based on the previous arms (see below) and also incorporated parts of the arms of the Rural District.

The gold field of the new arms is for the arable farm land, on which is placed a chevron with the three coronets of the 1568 arms. The green chief has a garb between windmill sails, refer to the characteristic Dutch-type draining of the area.

The woolpack and ram from the old arms reappear in the new crest, held by a lion. The Lion relates to King John and alludes to his journey to Swineshead after losing his treasure in the Wash.

The mermaid supporters have been retained, upon waves for the River Witham and other minor watercourses.

The motto was used by the Rural District, and is a pun on the name of the River Witham.

Arms : Sable three Coronets each composed of Crosses patee and Fleurs-de-Lys in pale Or.
Crest : On a Wreath of the Colours a Woolpack proper charged with a Ram couchant Or horned Sable; Mantled Gules doubled Argent.
Supporters : On either side a Mermaid proper crined and tail-fin Or ducally crowned Azure.
Motto: 'PER MARE ET PER TERRAM' - By sea and land.

The arms were officially granted in 1568. 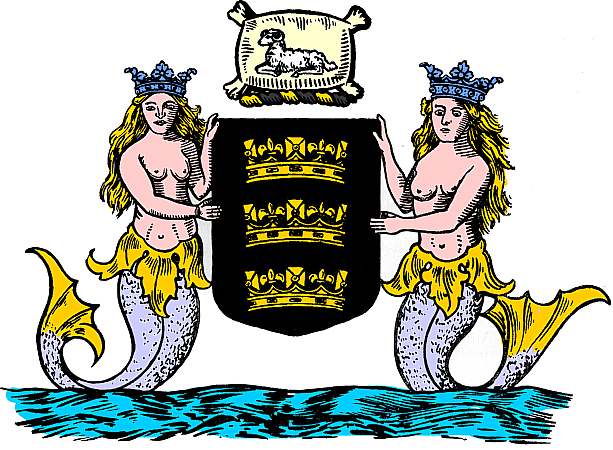 The black shield bears three Princes Coronets representing the three large landowners of Boston in 1568, the Duke of Richmond, the Duke of Suffolk and the Duke of Brittany. The crest shows a woolpack and ram are showing that Boston was a staple town for wool.

The supporters are mermaids, and local tradition has it that the Mermaids signify the connection between the Borough and two women of note in the reign of Henry VIII - Anne Boleyn and Princess Mary, Duchess of Suffolk.