From Heraldry of the World
Your site history : Boston RDC
Jump to navigation Jump to search 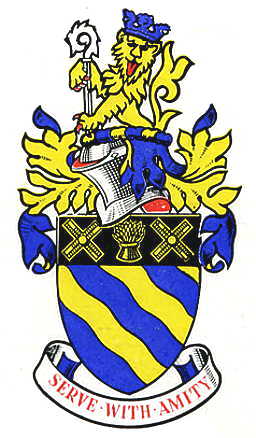 Arms : Bendy wavy of six Or and Azure on a Chief Sable a Garb between two Pairs of Windmill sails Gold.
Crest : On a Wreath of the Colours a demi Lion guardant Or ducally crowned Azure supporting a Crosier Argent.
Motto: 'SERVE WITH AMITY'

The arms were officially granted on December 1, 1953.

The chief has a garb between windmill sails, refer to the characteristic Dutch-type draining of the area and the fertile fields.

The waves symbolise the River Witham and other minor watercourses.