From Heraldry of the World
Your site history : Bowland
Jump to navigation Jump to search 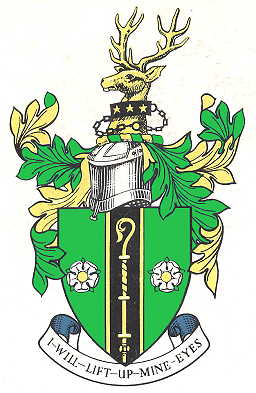 Arms : Vert on a Pale Or between two Roses Argent barbed and seeded proper a Pale Sable thereon a Crozier Gold.
Crest : On a Wreath of the Colours a Stag's Head couped Or gorged with a Collar affixed thereto a Chain reflexed round the neck Sable the Collar charged with three Mullets Gold.
Motto: 'I WILL LIFT UP MINE EYES'

The arms were officially granted on April 9, 1954.

The green background represents the Ribble Valley and the Forest of Bowland. The gold crosier recalls Sawley Abbey, indicating the important part it played in the social and economic life of the district. The white roses represent Yorkshire.

The stag's head recalls the stags in the arms of the Parkers of Browsholme and the Lister, Barons Ribblesdale, whose gold mullets on black provide the stag's collar.