From Heraldry of the World
Your site history : Brighton (England)
Jump to navigation Jump to search

Incorporated into : 1997 Brighton and Hove 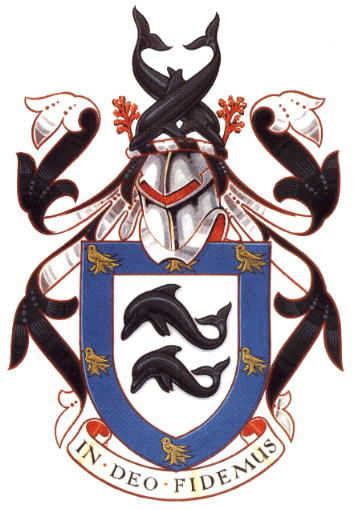 Arms: Argent, two dolphins naiant sable, a bordure azure charged with six martlets Or.
Crest: On a wreath of the colours, Two dolphins in saltire, heads downwards, sable between as many branches of coral gules.
Motto: 'IN DEO FIDEMUS' - We trust in God

The two dolphins have a lengthy history in the town of Brighton, the origin of which can not now easily be traced. The Commissioners of Brighton (the Local Government Body during the first half of the 19th century) used the device of two dolphins in their seal. It is now a matter of speculation whether the dolphins were adopted because of the town's association with the sea or because they had adopted the emblem of one of the leading families in the town. Both the Scrase family (who were associated with the Manor of Brighton and represented amongst the Commissioners), and the Lashmar family (one of whose members was High Constable in 1799) bore dolphins on their arms.

The blue border with the six martlets is derived from the arms of the County Sussex (see East Sussex and West Sussex).

The crest shows again the two dolphins, together with two branches of coral, a reference to the sea and the local climate.

The motto means "We trust in God".

Literature : Information leaflet issued by the Borough of Brighton.