From Heraldry of the World
Your site history : Brighton (Ontario)
Jump to navigation Jump to search 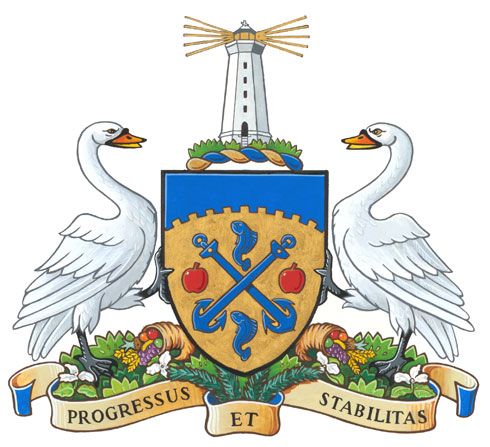 The arms were officially granted on February 15, 2008.

The yellow colour alludes to agriculture, particularly wheat and corn. The anchors indicate the area’s historic maritime trade and current recreational boating. The apples refer to a prominent local crop, while the fish refer to sport fishing and the fishing industry. They also allude to the heraldic dolphins in the arms of Brighton, England. The crenellated division line refers to industry.

The lighthouse is a local landmark, and the rays coming from it make a pun on the name Brighton.

Swans are a local water bird. The fir boughs allude to the park area; the cornucopiae are another indication of the area’s agricultural importance; and the trillium flowers refer to the province of Ontario.