From Heraldry of the World
Your site history : Bristol
Jump to navigation Jump to search 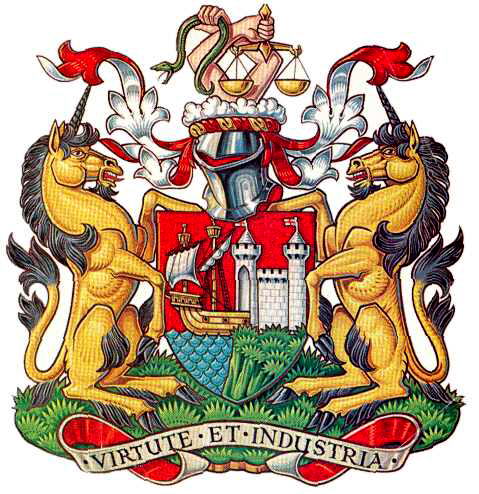 Arms : Gules on the sinister side a Castle with two towers domed all argent on each dome a Banner charged with the Cross of St. George the Castle on a Mount Vert the dexter base Water proper thereon a Ship of three masts Or the rigging Sable sailing from a port in the dexter tower her fore and main masts being visible and on each a round top of the fifth on the foremast a sail set and on the mainmast a sail furled of the second.
Crest : On a Wreath Or and Gules issuant from Clouds two Arms embowed and interlaced in saltire proper the dexter hand holding a Serpent Vert and the sinister holding a Pair of Scales Or.
Supporters : On either side a Unicorn sejant Or armed maned and unguled Sable.
Motto: 'VIRTUTE ET INDUSTRIA' - By virtue and industry

The arms are based on the early seals of Bristol, from which the ship and castle theme (signifying a strongly fortified harbour) developed. The shield was in use from about the 14th century, and to this supporters and crest were added in 1569.
The significance of these various items is recorded in the City Audit Books of this time:- the Unicorns will only do homage to men of virtue; the arms in the crest signify that good government depends on wisdom (the serpent) and justice (the scales) and that these are divine gifts from above.