From Heraldry of the World
Your site history : Broadland
Jump to navigation Jump to search 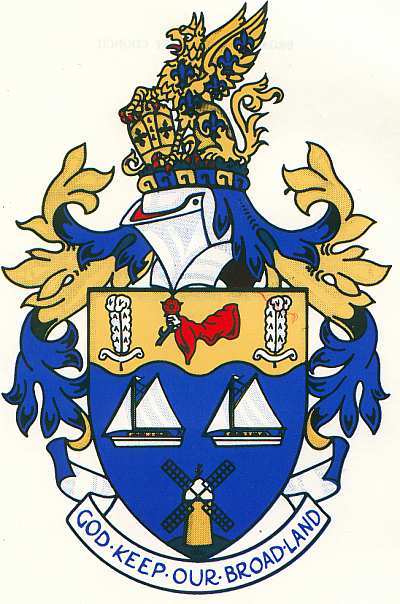 Arms : Azure in chief two Broadland Sailing Cruisers and on a Mount issuant in base a Norfolk Drainage Mill all proper on a Chief wavy Or between two Ostrich Feathers Ermine the Quill of each piercing a Scroll Argent a dexter Arm embowed in a Maunch Gules the hand proper grasping a Rose Gules barbed seeded and slipped proper.
Crest : On a Wreath of the Colours a Mount Vert thereon a Griffin sejant Or the body and underside of the wing each charged with three Fleurs-de-Lys Azure resting the dexter foreleg on a Mitre affronty Or.
Motto: 'GOD KEEP OUR BROAD LAND'

The main area of the shield suggests the name Broadland, with two Broadland yachts and a windmill on a 'blue field' which, with the wave above, refers to the rivers and waters of the District. The 'blue field' also denotes the name Blofield, suggested in the Oxford Dictionary of English Place names as referring to the Old English 'blaw' or woad-plant from which dyes were made. Above the wave are the emblems from the St. Faith's and Aylsham Shield, viz the sleeved arm holding a red rose from the arms of the Abbey of Conches which owned the Priory of Horsham St. Faith, and the ermine ostrich feathers of John of Gaunt who kept his Duchy of Lancaster court in Norfolk at Aylsham. These are on gold.

Above the Shield is the closed helm proper to civic arms, with its crest-wreath and decorative mantling in the basic colours of the arms, blue and gold. These symbolise the waters and crops of the District and are also the heraldic colours of the Bishopric of Norwich and the Abbey of Bury St. Edmunds, both of which held manors and lands in both the former Rural District Council areas.

On the wreath stands the crest, which denotes the two principal historical influences common to both former Rural District Council areas, namely the Bishops of Norwich and the Paston family. The crest of the family (who were seated at Oxnead and Hellesdon and who also built Thorpe Hall, and whose famous 'Letters' constitute a major national document) was a seated griffin in gold. It is here differenced by being charged with the six blue fleurs-de-lis from their shield, and rests a foot on a gold mitre from the Bishops' arms, with special reference to their ownership of the Manors of Thorpe and their Palace, on whose demesne the Council's offices now stand. The griffin sits on a grassy mound to indicate the Council's concern with conservation.

The Motto: 'God keep our broad land' not only brings the name into the design but, in an area with strong ecclesiastical links, expresses a pious hope for both the local and national security.