From Heraldry of the World
Your site history : Broxbourne
Jump to navigation Jump to search 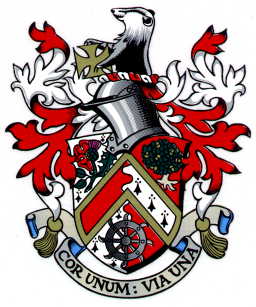 Arms : Per pale wavy Ermine and Gules on a Chevron Or between in dexter chief a Rose Gules slipped and leaved dimidiated with a Thistle slipped proper in sinister chief an Oak Tree eradicated proper fructed Or and in base a Catherine Wheel Sable a Chevron couped per pale wavy Gules and Ermine.
Crest : On a Wreath Argent and Gules, a demi Badger proper holding in the paws a Cross Formy Or.
Motto: 'COR UNUM VIA UNA' - One heart, one way

The arms were officially granted on December 4, 1974.

The arms have a parted field, the left side being coloured ermine to suggest the Roman Road of Ermine Street. The division of the shield is wavy, for the River Lea and the New River. The chevron recalls the chevrons of the Say family, one of whom has a memorial brass in Broxbourne Church. In the top left corner is a combined rose and thistle for King James I and VI of England and Scotland. He is associated with the manor of Theobalds. In the top right is an oak tree, for the Goffs Oak area. In the base is a Catherine wheel, emblem of the patron saint of Hoddesdon.

The badger in the crest suggests the borough's name -brock meaning badger. He supports a cross from the Meux family arms.

The motto COR UNUM: VIA UNA, meaning One Heart One Way, is adapted from the motto of the Cecil family.