From Heraldry of the World
Your site history : Buffalo City
Jump to navigation Jump to search 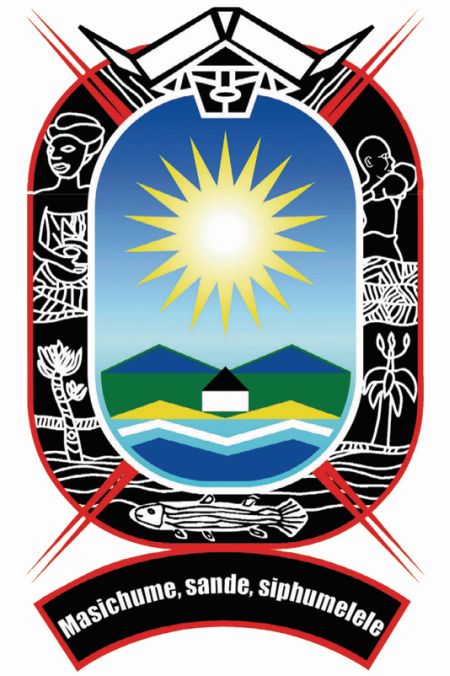 These arms are not officially registered.

The arms are in the shape of an abstract shield, with a red, black and white border around a picture of the sun and a traditional landscape.

The sun's rays represent the climate, our Sunshine Coast. It also represents life, unity, warmth and energy. The buffalo horns at the top of the shield represent the historical name of the Buffalo River and the area's natural heritage. The central image with the sea and rolling hills represents the land in which the people live. Traditional Xhosa culture is reflected by the black and white border. The border is rendered in a linear woodcut style, which has a strong tradition in South African art. Along the borders are various symbols from the Buffalo City area: a coelacanth (which was found off the East London coast), Aloe ferox and Xhosa culture and sport in the form of a boxer. The striking red and blue spears represent the warriors of the past.

The motto, in isiXhosa, is "Masichume, Sande, Siphumele" which translates roughly into "Let's grow, expand and succeed" and best reflects the city's vision of being a people-centred place of opportunity where the basic needs of all are met in a safe, healthy and sustainable environment.