From Heraldry of the World
Your site history : Burgess Hill
Jump to navigation Jump to search 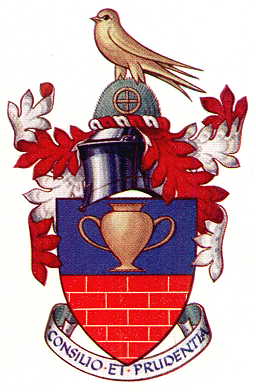 Arms : Per fesse Azure and Gules masoned Argent in chief a two-handled Vase Or.
Crest : On a Wreath Argent and Gules upon a Hillock Vert charged with the Wheel of a Potter's Wheel a Martlet Or.
Motto: 'CONSILIO ET PRUDENTIA' - By wisdom and prudence

The wall and vase represent the clay products of bricks and pottery, from which traditional industries the origin of the town can be traced.

Above is a grassy hillock indicative of the local scenery and commemorating the fact that Burgess Hill was formerly known as St. John's Common. The potter's wheel on the hillock again refers to the old pottery industry. The martlet represents the arms of six gold martlets which were those of the old kingdom of the South Saxons, and later used by both of the Sussex County Councils.

The arms are continued by the Burgess hill Town Council.