From Heraldry of the World
Your site history : Burton-upon-Trent
Jump to navigation Jump to search 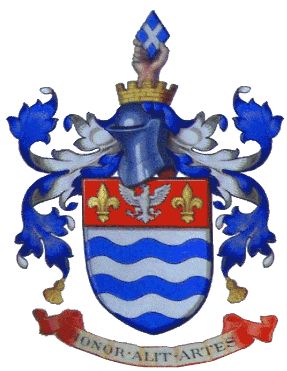 Arms : Barry wavy of six argent and azure; on a chief gules an eagle displayed of the first between two fleurs-de-lys Or.
Crest : Out of a mural crown Or, a dexter hand proper grasping a lozenge azure charged with a saltire argent.
Motto: 'HONOR ALIT ARTIS'.

Burton upon Trent Municipal Borough was formed in 1878 and was comprised of Burton, Burton Extra (Bond End), Horninglow, Stapenhill and Winshill though each retained their existing civil parish. A coat-of-arms was sought to commemorate the new Borough.

The new Burton upon Trent County Borough was granted a coat of arms by Norroy, King of Arms at the College of Arms after its incorporation in 1878 depicted the spread eagle from the Paget family arms, fleur-de-lys from those of the Bass family. The two wavy blue lines represent the rivers Trent and Dove, which meet near Burton. The motto ‘Honor Alit Artes’ is a quotation by Roman Statesman, Cicero, meaning ‘Honour Sustains the Arts’.

In 1928 a crest was added, which included a hand holding the saltire of Saint Andrew as an allusion to the early medieval chapel on Andresey island founded by Saint Modwen.

Literature: Image and information from http://www.burton-on-trent.org.uk/